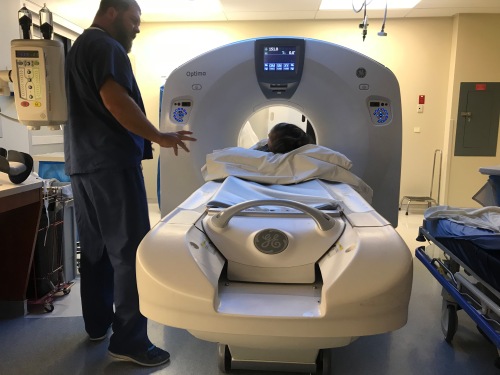 On Thursday my oldest and I were in the ER.  After a week of intermittent stomach pains, increasing each time, and culminating in a bad Wednesday night that almost got me to the ER in my pjs, I knew something more severe was up.  Every one of us has been there: “mommy my stomach hurts”.  We tend not to take it too seriously because:

A: kids put so much in their mouths.

B: kids eat more sugar than they should even when you monitor it and

But four bouts of stomach pain in one week took it to Defcon 3.

We saw our pediatrician first. After examining P she suggested we go to the ER . She felt it could be appendicitis and thougth it was best to rule it out.  Here’s where the stupidity of our heath coverage in this country is at its best. Our pede has privileges at Los Robles in Thousand Oaks.  I know we have full coverage with Motion Picture Health at Tarzana. I also know that if you go to a hospital where you have no coverage or partial coverage, even with amazing insurance, your bills could be so outrageous you’ll end up back in the hospital with an anxiety attack.  So, in the middle of our consult with our pede I was calling our insurance to confirm our coverage at Los Robles.  It’s the added step that starts the stress machine when your child or anyone you love is ill.

For me the hardest part of the day was having to tell P that if she had appendicitis she would need surgery. I knew it would scare her so I wanted to tell her on the way over in the comfort of our familiar car.  I followed it with all the positives of the day: we were getting to make decisions with plenty of time and a clear mind, it was still early in the day so if she needed surgery the doctor would still be in a prime state and for these doctors an appendectomy is as common and easy as us blowing our noses.  We remove boogers they remove appendices.

For P the hardest part of the day was the catheter they left in her arm after drawing blood.  Not just painful, but a physical reminder that surgery could be around the corner.   The other hateful part of the day for her was the CT scan.  It freaked her out. It kind of freaked me out seeing her little body in such a big machine but then another thought came to mind: how many moms out there have had so many tests with their kids that a CT scan is their new normal?

Maybe because my brother had heart surgery at 5 I am always aware things could be worse. Every time I set foot in a hospital with my girls (it’s only been 3 times total for the two) I visualize all the mothers in the world sitting beside their terminally or chronically ill children and I send them all the love and strength I can. Honestly, I would never want to be in their shoes…it would literally kill me. So on Thursday I kept telling myself  “This is ok. This we can handle. It’s only possible appendicitis.” And I played games with my mind through every step of the way.

When P was getting an ultrasound I thought in 20 years or so I could be in the very same place with P, but we’ll be hoping to see a little “tornado” on the screen. I prayed for our relationship to remain close and that I’ll get the blessing of seeing my grandchild for the first time along with my daughter.  I shared my thoughts with P. I saw the worry on her face.  I also shared that I met her for the first time, exaclty like this with an ultrasound machine, over 11 years ago.  We laughed at the thought of me being a grandmother in 20 years and of me begging for it not to be too much earlier than a solid 20 years.  The games we play to stay sane.

Another game I played with P was the one of positive thinking.  I’ve read “As A Man Thinketh” and so on our drive over I asked her to visualize and think with me all the things we hoped for. I asked we’d get great and kind doctors who would help us understand what was happening. She asked for kind nurses. I asked for a clear diagnosis or at least the ability to eliminate causes. She asked for her not to need surgery.

When we arrived at Los Robles we had kind nurses every single step of the way, from admitting to discharge.  Dr Brooks was incredible. He explained so much, in detail without a hint of condescension. When I said to both him and a nurse that I was a big believer in homeopathics. Neither gave me that half eye roll many doctors do. In fact, both respected my methods and seemed relieved I was hands on and more educated than most on how the human body functions. The nurse also seemed relieved P was not asking for pain meds and preferred using her fever and pain as barometers and indicators for possible causes of the problem. Clearly a sign of high pain tolerance.

A quick lesson on fevers. Fevers aren’t the problem. A fever is the body’s way of sanitizing an infection like the hot water used in the sanitizing mode of your washer.  I knew P’s situation was getting better when her fever started going down. Since leaving the hospital it has never returned. If you make the fever go away you’re not allowing the body to take care of it as it designed to do.

We spent the day laying in a bed, watching a DIY home flipping show and cuddling. When you isolate that on its own it was an amazing day.  Add our surroundings and the pending test results to the story and it becomes a stressful day.   After blood and urine analysis and an ultrasound and a CT scan they found it wasn’t appendicitis but mesenteric adentitis or inflamed lymph nodes in the mesentery, which is a tissue that connects the intestines to the abdominal wall.  It is the second most common cause for acute right lower quadrant abdominal pain.

To quote Coach Eric Taylor from Friday Night Lights, “it did not escape me” that everything we asked for and visualized at the begining of the day came to be: great doctor, kind nurses, clear diagnosis and no need for surgery. On a side note, that phrase “it did not escape me” is a beautiful alernative to “I get it”, “I see it” “I acknowledge”….or maybe it’s Coach Taylor who’s beautiful and the phrase sounds lovely coming from him in that Southern accent? Anyway, knowing it wasn’t anything super serious, just an infection her body was fighting, I was ready to head straight home after making a pit stop at Whole Foods to gather my tools: raw food.

Since Thursday the girls and I have been on a diet focused on boosting the immune system, eliminating toxins and decreasing inflammation.  Green juice, pineapple, loads of water with lemon, probiotics, greek yogurt with manuka honey and cinnamon and Immunity Soup from Dr. Weil’s cook book “True Food” are on constant rotation.  I think I need Immunity Soup to be a weekly staple for a while.

I am good under a crisis. For some reason I can think very clearly, a plan of attack is obvious and I can remain calm. The minute the crisis is over I am exhausted and emotions get back in the game. We were sitting at dinner when P said “ I could be in surgery right now” and I started bawling. I could feel the fear releasing.   Eventually gratitude replaced the fear and its remained in double doses ever since. 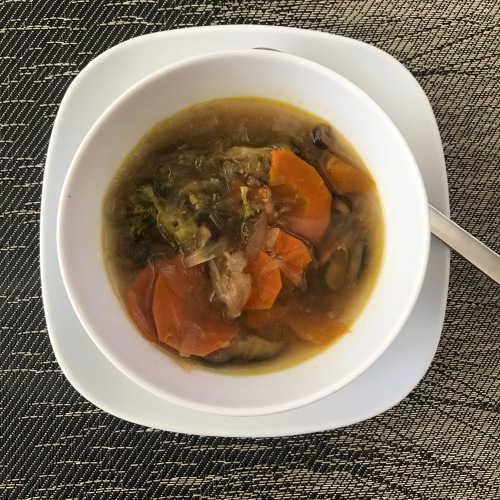