Isn’t it funny that what seems so normal to one person is mortifying to another?  Me placing G on this shelf and walking over to get a napkin is perfectly normal to me.  Fortunately, the guys at this pizza place in Venice feel the same way. 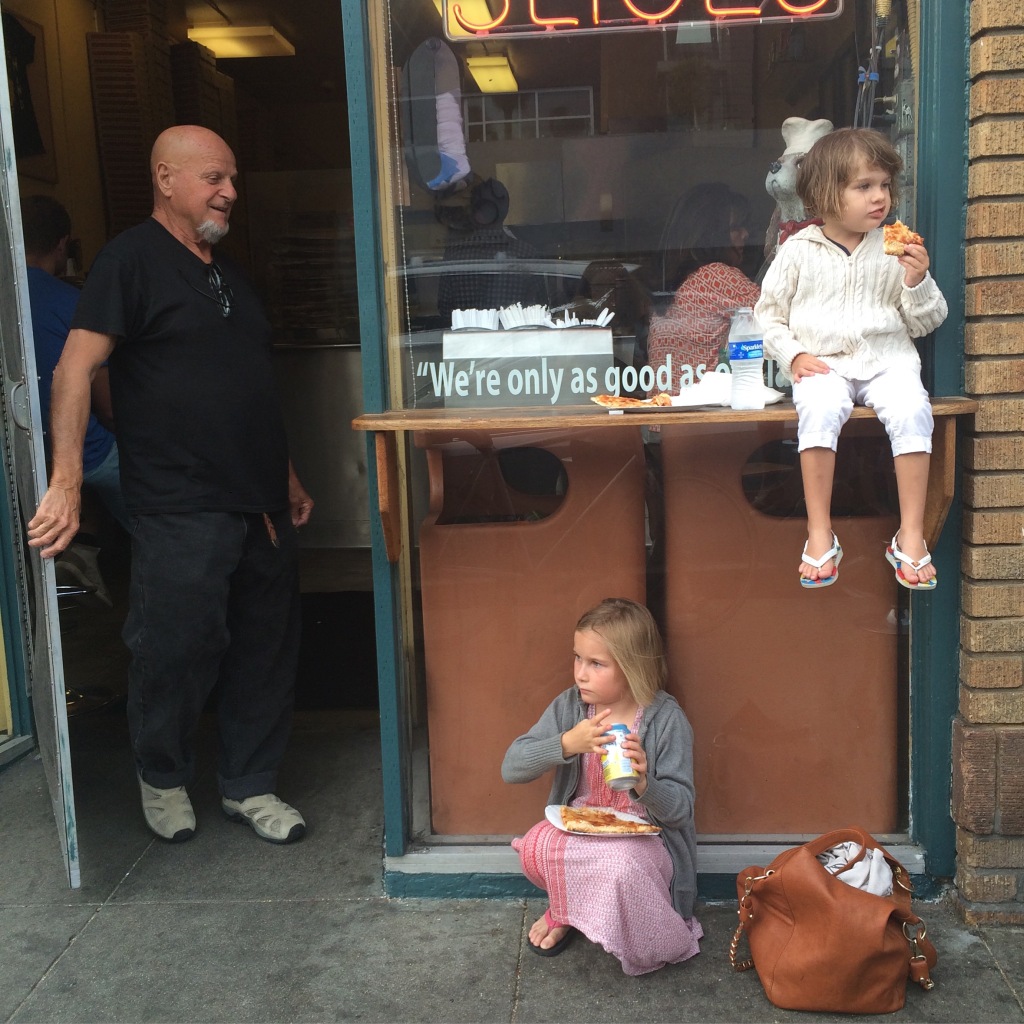 Another day I was at a shipping location. To keep G in close proximity while I worked a self-help kiosk, I placed her on a table. It was a large table next to me where I could feel her up against my waist. The lady at the counter yelled at me for putting her up on the table. She said I wasn’t being a vigilant parent and that I was putting my child in danger.  I laughed. How different we all see the world.

So, first let me go back to how I gradually and carefully teach my children about the dangers of, say, being up high. Babies and toddlers will climb. Children climb. They/we are curious creatures. From the very beginning I let my girls climb because they are going to do this whether I’m there or not. My philosophy is that I’d rather watch them and teach them what to look out for and how to do it safely rather than blocking the behavior all together. They will try again when I’m out of range!  I’d rather be right there watching their mistakes, ready to catch their fall and allowing them to learn by their own mistakes. Does it mean I’m not vigilant? Absolutely not. Quite the opposite. I am at this phase absolutely, 100% focused on what they are doing. I have to be!

Let me take a real life example. Eighteen-month-old G decides to climb up on my kitchen counter using the stool. She gets up. I’m watching. I haven’t said a word. Then I realize she is trying to open the cupboard door to get a snack. (By the way, at this point G is feeling incredibly independent and self assured. She is satisfying her needs on her own.) I know she needs to step aside to open the door. She does not. She thinks she can lean back over the counter.  This is of course incredibly dangerous.  I finally step in. “G do you think you can open the door while still standing there? Is there enough space for you and the door?” Now I started to make her think! She looks. She ponders. She says “no”. “Ok, what do you need to do then?” She starts to step to the right of the door she is opening to the left. She has just learned her first lesson in spacial relationships. You may not think this is important. Next time you’re in a Trader Joe’s parking lot watch people park. How many do you think could benefit from a lesson in spacial relationships?

And now the final step. G now wants me to take her in my arms and lift her down off the counter.  But I won’t. I say “If you got yourself up here, you can get yourself down.” She starts to think. She looks for the stool.  She tries to get down in all the unsafe ways. She wants to go facing front. She tries to slide off backwards but she’s not aligned with the stool. It takes my help,  teaching her how to do it for her to get it right. I will have to help her more than once. I will have to watch her vigilantly for weeks. Maybe months. P was a bit more dexterous with the climbing. G got it after a while, but it took her a little more time. I had to be vigilant.

Climbing up and down will continue for weeks. I will be there. My allowing G to climb makes her wait for me. She won’t attempt it alone. I’ve just made her world safer by giving her freedom and trust. (But the woman said I was placing my child in danger remember?) Each day she gets better and better. Each day I relinquish a little tiny bit. She starts to do it alone…or so she thinks. I watch from a distance. She’s thinking things through. She pushes things aside and out of the way. She moves things to other counters to make space for herself. Each day she gets more confident. Each day she gets faster. Each day she becomes more and more of an expert. I start to hoover from a distance less and less.  If I’m in the other room putting laundry away I do not need to worry that she’ll climb up to get her own snack. Time and patience have made her safe. And by time I mean months. I’ve been vigilant in various forms for months.

I’ve also placed G on the counter as we’re baking and asked her to stay there and not move while I grab eggs from the fridge or put a sheet in the oven.  She’s sat patiently next to me as I cut veggies. Each time I am watching her out of the corner of my eye checking to see how her impulse control is taking shape. Each day I give her practice sitting on a ledge waiting patiently and not moving while I’m an arm’s reach away. But if you didn’t know it, it looks like we were just baking cookies. We’re having fun not doing a training.

Fast forward. G is now 3 years and some months old. I’m at a busy store full of people coming and going. I need to ship a box. The fastest way out of the shipping store is to use the self-help kiosk. But while I’m focused on reading zip codes and shipping times I don’t want to lose complete focus of G. I don’t want her to run off or for someone to grab her. The safest place in my mind is on the counter next to me where I can feel her touch my hip. A place where I know she won’t move because I’ve done this hundreds of times at home over the past years! On the counter is where no once can take her away, where I can feel her while I quickly input info. But the lady at the counter feels I am negligent and putting my child in danger. She feels I am not a good mother. She has no idea about my life or how diligent I’ve been every week, every day, every minute for YEARS! Her rudeness is offensive. He accusations are extremely hurtful. But her ignorance is obvious…to only me. No one else knows what goes on behind my scenes.

Then there are places like the pizza joint in Venice. No one said a word about G sitting on the counter. No one criticized me. Instead they were amazed at G’s poise and calmness. That day the restaurant was crowded and hot. The sidewalk was busy with people coming and going. There was no where to sit. My safest solution was to have one child on the one empty counter space where I could stand right in front of her and help her eat. The other was below, sitting on my foot while she ate her pizza. I had eyes on one and could feel the other. G who at three, will eat and wander, was now sitting still and eating. She wasn’t going anywhere, particularly out in the street in front of cars! P who has much more developed self control at 7 is also well versed in our safety protocol. She knows that while I have focus on G I need to feel her next to me when we’re in busy public places. And both know that when I walk away for 10 seconds to get napkins no one moves.  Instead of criticizing me two hipsters offered up their seats for us on the sidewalk. I was grateful because, yes, regardless of how much training the girls have had seats are safer than ledges or counters. And their reaction made me feel loved instead of insulted and for that I hope karma sends her magic love their way.