We signed Annika up for tennis camp this summer.  My goal is for her to learn to play the game at a decent level. She doesn’t have to compete but I do want her to be able to play. I also want her to have fun with the sport which is why I thought camp would be perfect.

The camp is for 5-8 year olds.  She is 4.5. Given how long she’s already been playing, I knew being the youngest wasn’t going to be a problem skill wise.  I was more concerned about how she’d feel socially. Fortunately, she fit right in no problem. In fact, she made many friends.  Every time I dropped her off and picked her up other campers came by to say hello. She was also very proud of herself for doing it. She really looked forward to it, was excited and wanted to continue doing it all summer. But I felt different and I think I did the right thing by pulling her out but I’m not 100% sure.

First, she was so exhausted every day.  I mean really fatigued. I could tell it was too much with the heat and the age gap.  And second, more importantly, after one week of camp I could see her strokes taking a turn for the worse.  I knew I had to pull her when Dave sent me a few pictures of her hitting balls and every one made me cringe.

I primarily teach by feel, specially at this young age.  I try not to use too many verbal cues and instead I let her feel what the right stroke feels like.  For example, on the forehand side the left foot should be out in front. That’s the weight bearing foot in the stroke. Instead of telling her over and over to put that foot out in front I have her try to push me with her shoulder in a side ways position the same way she’s positioned when hitting a forehand.  When her foot is in the right place she can push me harder, ie hit the ball harder. When the foot is in the wrong place she’s off balance.

In a camp scenario it’s too hard to work with each child so closely.  They taught very little technique which I expected. That was fine for me because I’d rather they do nothing than do the wrong thing. However, they started asking her to hit with one hand instead of two and to hit volleys. The kid is barely taller than the net. How is she hitting volleys?  Also, I’d rather her hit with two hands and feel strong than hit with one and feel weak and develop bad habits.

The other thing I didn’t like is that they place too much emphasis on where the ball is going…over the net.  I could care less where the ball goes as long as the stroke is right. If the stroke is right the ball will eventually go where it should. Plus, I want her to swing fast and smooth not worry about winning a point or a game.  When they worry about the outcome they develop awful habits and hit tenitively.  Like in life;  if you worry about the outcome you’ll never take the necessary risks.

I’m trying not to be a crazy tennis parent but I just can’t sit back and watch Annika’s strokes get ruined.  I’ve been teaching her since she started standing!  Literally, the kid stood and I put a racket in her hands.  Not to make her a champion but to develop her senses and hand eye coordination that will help her in whatever sport she chooses to do.

I want her to have fun but not ruin a skill. So, I’ve decided to put her in other non-tennis camps where she’ll have fun but I’ll continue to teach her myself for now.  I even looked through pictures to make sure I wasn’t over reacting. Every before/after picture is the same thing.

This picture is from after a week of camp.  She’s focused on getting the ball over the net so she’s pushing it up. Her weight is back or stationary not going forward. Her wrists are in a weak position because she’s trying to hit up by pushing not stroking through the ball. 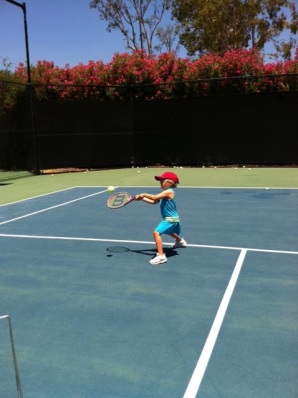 The picture below is from two weeks before camp.  First notice how she’s not even facing the net. We’re at the back of the court. The goal is to hit the ball not get it over the net.  Her weight is fully going forward. She’s hitting through the ball not pushing it forward and her wrists and arms are in a strong position.

But the one common thing she has in all the pictures is her focus. This kid can focus like nobody’s business when she wants to. Below is the first day of camp and Annika has her game face on. The minute we got out of the car she was in the right frame of mind.  I don’t want to waste that!  That is something you don’t teach. A person either has it or doesn’t.