Today was one of those rare days when it’s just P and me and we have no plans. The day evolved but we had a couple of breakthroughs.  First, P is the one who directed what we did and second, we actually cleaned up as we went along!  It usually takes a lot for her to clean up but today she went along with it without a fight or delay.
P pulled out the games and puzzles out of her game drawer after breakfast. First time she’s shown an interest. First we played the fishing game. 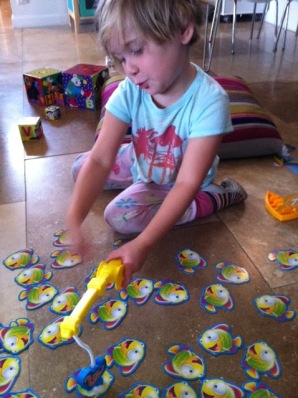 You have to collect either the same color or number on the fish until you fill your boat up with 4.  You fish and if you catch the wrong fish you put it back.  It never mattered where I put my bad fish back, or if P saw it. This time she saw I picked up one of her orange fish and saw where I put it back. When it was her turn she went and grabbed it! Too smart!
Next we put a puzzle together. Amazed she seems to figure out the harder pieces first.  I need to stop telling her how I would go about putting it together and let her do her thing. 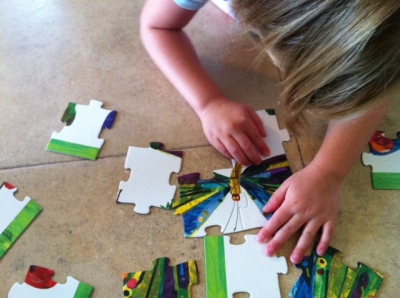 Then, we played with her stacking alphabet boxes.  It’s been at least a year since she pulled that out! After stacking it I asked her to find certain letters.  She got some but didn’t get others. Then, it surprised me to see her looking at the letters on the boxes and drawing them on paper!  Woohoo! She’s getting it and she’s showing an interest. 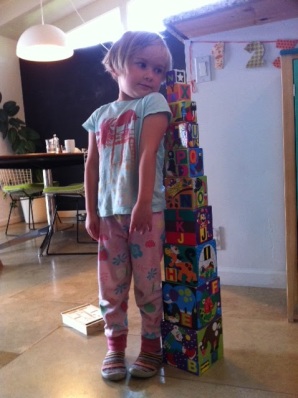 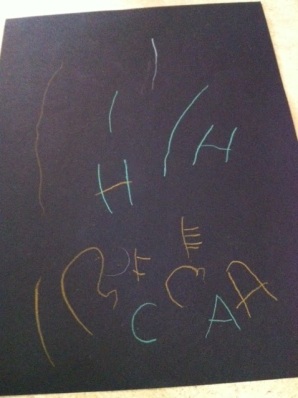 We finally started cleaning up.  She wanted to paint or stamp as I had first suggested. I asked her if we could clean up some mess before starting an art project. We cleaned, she sort of played and cleaned. I did some stuff on the computer.  We cleaned, we played, on got on the computer again. Finally outside. She played, while I cleaned the back yard a bit. Finally we painted.
I had some lanterns left over from her last birthday.  We decided we could paint them orange and turn them into jack-o-lanterns for Halloween. 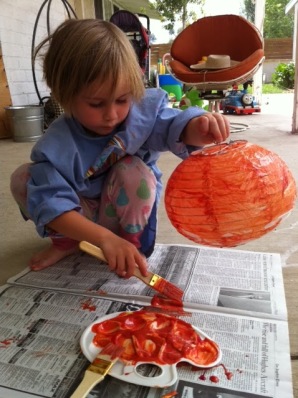 When we finished painting we cleaned it all up! Again, a first! Then we made lunch, salad and quesadilla for me. For her it was salad, quesadilla, apple sauce, probiotic drink and turkey and cheese!  Growth spur? Then she took a nap after lunch. 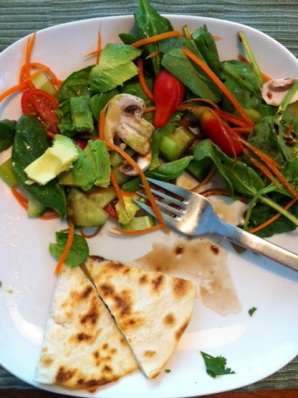 It’s almost 5pm. She’s still napping. Neither one of us has gotten out of our pjs. it’s been a remarkable day.  I pray we will have days like this till the day she leaves for college.  I really really love my time with P!  I remember it being so hard when she was a baby and then a walking, curious toddler.  The dynamic of being around her has changed. I have a buddy.