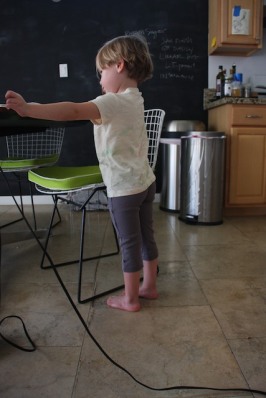 Last week a friend of mine posted on facebook a tutuorial on how to turn old adult size shirts into baby leggings.  The tutorial was by Made by Rae.  I had just cleaned out my closet of clothes I no longer wore.  The timing was perfect.
Even though baby tights would not fit P who is now a 3T I thought I could make footless leggings for her instead.  In fact, during the summer I have a hard time finding shorter leggings that can be worn under dresses.  I’m rather paranoid about P running around sandy playgrounds with just undies.  I don’t want sand up her “nunu” (as we call her private female part) and mostly I don’t want strangers getting even the slightest glimpse of her “undercarriage”.  The timing of this tutorial was just perfect all around.
After reading the Made by Rae instructions I went back and thought about how to make these for a larger child.  First I took a pair of her current leggings and traced them.  Then I pulled out one of my favorite Splendid tees that’s seen better days on me and had a bleach stain.  I plotted where the best placement for each half would be.

In the Rae tutorial she has a fold on the outside of the leg but for a larger size that’s not possible.  A seam was going to have to be present on both the interior and exterior of the legs.  I was also going to have to make the leggings 2-3″ shorter than the leggings I used to draw my pattern/mold.  That was ok since I wanted shorter leggings anyway.  In fact, I used the bottom hem of the shirt as the bottom hem of the leggings so I wouldn’t have to sew a clean edge. I actually loved the stitching used on the tee so it was even better as the bottom folded over hem of the leggings.
Once I cut out the fabric pieces I sewed the exterior seam.  Then I sewed the middle and interior seams like Rae showed how.  The waist was next.  P’s waist is 19″ wide, so I cut the elastic band at 19.5″ and then sewed it together with 1/2″ overlap (just like Rae shows).  The problem is that according to my pattern I had 22″ of fabric at the waist.  Instead of following the Rae instructions where I sewed the fabric right onto the band I decided to fold the fabric over an 1/8″ and then fold again completely over the elastic band.  I sewed the fabric to itself with the band loosely inside.  This way the fabric wasn’t going to be permanently bunched up in specific places and I’m not talented enough to gather it properly and evenly all around.   It worked and looked great.
Finally, just for a little added detail I took two buttons from the shirt and sewed them on each leg.  I wanted 3 buttons on each side but P insisted that she only wanted one.  My “client” won out.

I can do details but I can’t manage to line up seams!
This was such a great project. I didn’t have to say good bye to my favorite tee. I got to turn it into leggings for P which makes them even cooler in a way. Thank you to Rachel and Rae for making this cool tutorial and for passing it on!!!

One thought on “My Tee Shirt into Her Leggings”