Every time we go on a trip I see how beneficial it is for P.  She develops in amazing ways and never in the ways I predict.  This last Seattle trip came together at the last minute so we decided to drive.  It’s an 18 hour drive, not accounting for food, potty and run around stops.  It took us roughly 24 hours.  Two 12 hour days on the road.

The first day P was not happy.  She wasn’t awful but it was definitely a challenge.  By the second day she settled into the routine and on the return it was even better.  P got that she was going to have to entertain herself somehow.  We downloaded a few games and videos on our iphones.  The games were more popular.( I was happy about that as I’m trying to keep tv watching to no more than 2 hrs a day. The games promote learning letters, numbers, etc.)  On the return I was actually able to read my books for good stretches of time.  I think this ability to be patient and to adjust to a new routine is remarkable.  I think it forces her to find a stimulus from within herself or of her own making instead of being stimulated by something external.


Another little “awakening” happened at breakfast after our first night on the road.  We were in Shasta, at a charming diner.  This little down was so beautiful and quaint it looked like the set from Northern Exposure.   P and I were sitting at the table.  She was a bit antsy so I started a conversation that went like this:


That went on for a while and she couldn’t articulate at first the differences but she did begin to really take notice of her surroundings.  From then on I could see her really observing every new location we went to. 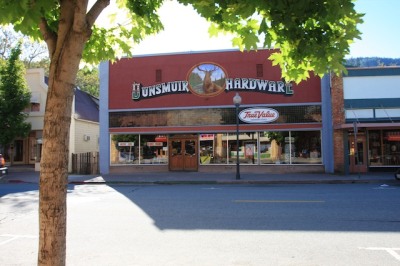 Once in Auburn, Wa, we went to a park near grandpa’s house.  Parks in Southern California are different than the ones up there.  Here a park is fenced in and it’s just the park. There the parks are unfenced and the ones we went to had trails through forested areas next to them!  All of these trails were amazing.  Up there berries grow wild. Blackberries and raspberries are in season right now.  I pointed out a raspberry to P. She was so excited she could pick berries like Little Red Riding hood!  I didn’t expect for her to be excited about this…but  it’s true. You can’t pick wild berries down here. 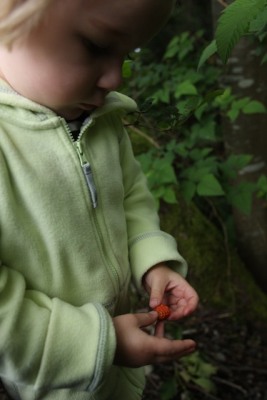 On most trips she eats new food.  This trip it was toasted almonds at Cafe Presse, a great French Bistro in Seattle.  The food, atmosphere, and people in this place were phenomenal!   I hope it’s things like this that will unconsciously encourage her to travel to France later on in life.  P soaked it all in and actually chatted with people seated next to us. 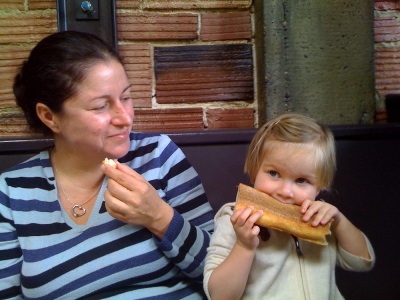 That’s the one consistent thing to come about on every trip: P’s use of new words.  Every time we go away she learns more words and becomes more comfortable talking to people.  She becomes even more  social and starts talking to waitresses and other people we are talking to.   On this particular trip I noticed it wasn’t just new words she was using.  She used new tones to really articulate her feelings and the connections between events, people and places. She wasn’t just talking to waitresses she was ordering what she wanted to eat.  Again, I find it all amazing.  The rate of development is just amazing!